Week 8:  5.5 miles to run the East-West streets deep in the Lower East Side from Catherine Street (south of the Manhattan Bridge) to Grand Street (just south of the Williamsburg Bridge), all south of Canal Street or east of East Broadway: Division, East Broadway, Henry, Madison, Monroe, Cherry, and Water. 11:00am Monday (11/8/2021).

Very confusing part of town, with the unusual angles of the streets! It has been called Lolo (Low Lower East Side) since the early 2000s. The only two musical artists I know of who lived in this part of town (south of Grand, east of East Broadway) in the 1950s are John Cage and Cecil Taylor. Robert Rauschenberg lived in three different places south of the Brooklyn Bridge: Fulton Street, Pearl Street (Jasper Johns was in the same building), and Front Street. (see main map for details) 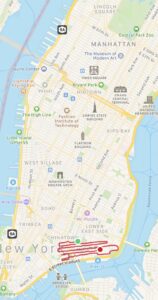